The auction at Forman's Gallery in London raised considerable funds for the Bethnal Green Tube Disaster Memorial, with all proceeds going to the charity. Mayor Boris Johnson and the comedian John Ryan did a superb job of auctioneering the pictures and
photographs, including photography by Duffy, Terence Donovan and Mike Pattison.


Described by the organisers as having an 'ethereal quality', I was also delighted that my picture was very well received in the auction, so adding to the Memorial funds.

The auction not only raised awareness and funds for the memorial, but was also a chance for many of the original inhabitants of Bethnal Green, now spread out around different areas of London and elsewhere, to come together to reminisce about the past, with a mixture of poignant memories, nostalgia, reflection on the social and economic changes over the decades, as well as future hope.

Forman's Gallery itself is indicative of such changes.  With stunning views of the newly built Olympic Stadium just across the river, Lance Forman has transformed a family business into a venue of the highest calibre, with a superb restaurant on the first floor and the imposing interior of the gallery on the second floor. The heritage of the original business is maintained, with smoked salmon still prepared in the traditional manner on the ground floor, both for the restaurant and delivery to venues across London.

Posted by Maria Bragoli Fine Art Photography at 12:42 No comments:


A selection of my work is currently on display at Forman's Gallery, London until Sunday 16th June 2013. Apart from the Wednesday auction, entry to the gallery is free and you can also view the poignant exhibition of personal records and newspaper cuttings of the disaster. There is also work for sale by a number of other artists and Mike Pattison's superb East End photographs. All sales from the exhibition will see a contribution going to the Bethnal Green Tube Disaster Memorial fund.


More information about the Stairway to Heaven Memorial is on the Facebook Bethnal Green Memorial
page   HERE
Posted by Maria Bragoli Fine Art Photography at 12:37 No comments:


Tomorrow evening, Wednesday 29th May 2013, at Forman's Fish Island Gallery, London, there will be a special charity auction to raise more funds to complete the memorial to those who died and suffered as a result of the Bethnal Green Tube Disaster of 1943.

It has taken decades for a memorial to be planned and funded, as a central point to commemorate the disaster. Until then, stones were sometimes used to commemorate the dead. However, not all survivors could afford such a stone, if  for example, austerity prioritised feeding their family and children. The memorial is part completed. Fewer survivors now remain. Called Stairway to Heaven, the aim is to have the memorial finished for next year.

The photographer, Mike Pattison, has a superb selection of 1970s East End images on display, some for auction, some for sale, showing a way of life and a range of characters which have all but disappeared, now that the area is being regenerated.

I have donated one of my fine art pictures, 'When the Last Tree . . .' The organisers have described the picture as having an 'ethereal' quality, and it will be auctioned on the night. There will also be the iconic Aladdin Sane album cover image, by David Bowie's photographer, Brian Duffy, as well as fine art work by Terence Donovan and other artists, all going under the hammer.  Mayor Boris Johnson will be there to get things moving, so it promises to be a spectacular night!

Posted by Maria Bragoli Fine Art Photography at 18:26 No comments:

A selection of fine art work is on show there. For details, please see my  Current Exhibitions page
Also Art House Leicester

The annual weekend event, plus one extra day on Monday, of "extraordinary art in ordinary houses". Ten locations in Clarendon Park and Stoneygate, Leicester, open up to exhibit the highest quality local art. I am delighted that I have been asked to take part again for my second year at this event.


A full range of my bespoke framed work will be on the walls at Ellerington Fine Art Gallery, from The Wistow Trees Collection, to abstracts and cityscapes, such as Curve Blur. My work will be in the front room on the first floor. I will be at 190 Clarendon Park Road throughout the three days and look forward to meeting past collectors and buyers and have the chance to also show my work to new viewers.

There is also breathtaking large size oil on canvas work by Louise Ellerington, female figures in oils by Rosemary Clements, art photography by William Diaz, cows and other animals by Ian Stewart, to name but a few.

Posted by Maria Bragoli Fine Art Photography at 18:04 No comments: 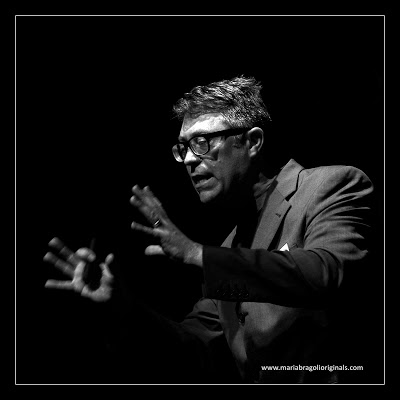 The World's Quickest Theatre festival has come to Leicester at The Y Theatre and promises to be an amazing event.

A picture from the 1448 Leicesterfest of theatre, where I am taking promotional, arty type (of course!) shots of the event.  Jodi Paul Wooster, over from Seattle, on stage, explaining that anything and everything can happen - 48 hours to create 14 plays!

A wider selection of images can be viewed      HERE      documenting the story of the 1448 Theatre Festival in May 2013.
Posted by Maria Bragoli Fine Art Photography at 01:30 No comments:

As part of the 'Y' Theatre's 14/ 48 Theatre Festival in Leicester towards the end of May, I was invited to exhibit a selection of my work, mainly abstract and semi-abstract. The festival mixes a variety of artistic forms, from theatre and music to fine art, promoting artistic and creative freedom and cross-fertilisation. From this brief, came a new abstract work from me, Hope, symbolic at both an individual and a collective level. This new work forms part of my ongoing series, Contemplations on Darkness and Light, which already includes images such as Blue Planet, Orange Light and Skal.


See the  Current Exhibitions page for venue and my exhibition details

The 14/ 48 Theatre Festival itself takes place on Friday 24th and Saturday 25th May, 2013. Originating in Seattle, USA, the festival at The Y Theatre in Leicester promises to be an improvised, spontaneous alchemy of theatrical creativity and performance. Throwing together a range of actors, directors, scriptwriters, musicians and other crew, both from Seattle, Leicester and elsewhere, they will have 24 hours to create and deliver 7 plays to a live audience. On the second day, the process starts again, with the creation of 7 new plays, performed to the second night's audiences. 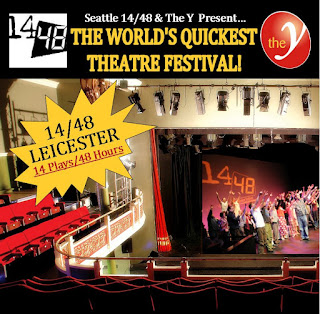 Not only was I delighted to be asked to exhibit my work as part of this festival, I look forward to being around that weekend to record these creative improvisational sparks.

...
Posted by Maria Bragoli Fine Art Photography at 23:58 No comments:

I believe that it is important to display my work in an appropriate setting and, if in galleries, to know that my work will be promoted effectively and that it will be a pleasure to work with the gallerists concerned.  This has been the case in all the exhibitions that I have done so far.

I am in the process of discussing exhibitions with some new venues, allowing my work to be seen by new viewers. Combined with the galleries' promotion, I let my work speak for itself, thereby allowing  me to devote my time to creating 'intriguing' and 'enigmatic' images, as quoted by a gallery curator.

The first of these exhibitions will be in May and so I am busy preparing new work as well as selecting from some of my existing images, both landscape and abstract, and look forward to displaying my work for the reaction of  viewers, previous and new.
Posted by Maria Bragoli Fine Art Photography at 02:54 No comments: 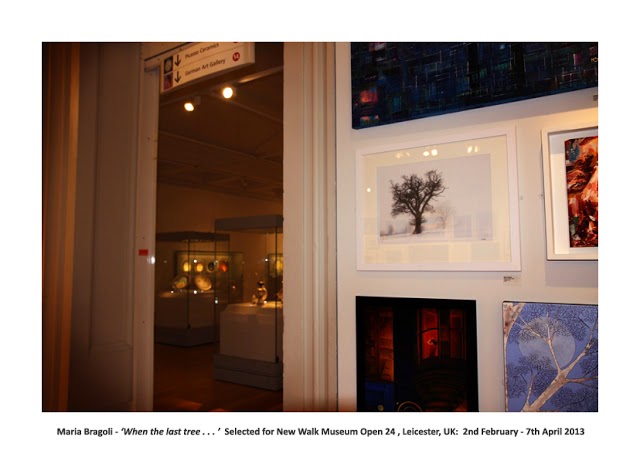 Posted by Maria Bragoli Fine Art Photography at 18:46 No comments:


I am delighted that one of my images has been selected for the Leicester Museum Open 24.  This is the first time I have submitted work for this long-standing and prestigious annual exhibition.   (This image has since been sold.) ﻿﻿

My Open 24 submission is a digital C-type print, and so, archival quality. It is large size, 39 cm x 61.5 cm (approx. 15.5 inches x 24 inches), and professionally framed with acid free mount and solid tulip wood frame. Other sizes and different framing options are available from me directly or through selected galleries, still within the limited edition of 150 in total.

Although the image was created in Leicestershire, the title, 'When the last tree . . . ' is based on the Cree Native American proverb urging an awareness of the actions of our environmental impact - an idea from centuries ago which is even more relevant today.

'Only when the last tree has died and the last river been poisoned and the last fish been caught will we realise that we cannot eat money,' (Cree Native American proverb).

Another connection with my image is that tulip wood, as a native North American tree, was extensively used for dugout canoe building by the Native Americans, since it was light yet with a fine grain, allowing it to be carved and worked easily.  The frame used in my Open 24 image has a hand painted wash bringing out the beautiful, fine texture of the wood and further enhances the delicate lines and colours of the image itself.

.
Posted by Maria Bragoli Fine Art Photography at 23:06 No comments: