Maria is only one of two fine art photographers throughout those counties to be included in this prestigious SELECT group.

Please note that images on this site are kept at low resolution, giving a flavour of the work.  To appreciate the tone, detail and impact of an image, there is no substitute for seeing the work for real, either at a gallery or other location, or by contacting Maria directly.

-  Created within a mile of Wistow Church, Leicestershire. Inspired by the etching style of printmaking.
-  A series of four fine art photographic images. Limited number variable edition of 150 of each image worldwide.

Church Brook - view behind Wistow Church
Misty Trees - a row of ash trees, with the foreground one taking centre stage
Winter Mist - a row of ash trees fading towards the horizon
'When the last tree . . .' - a solid oak,with others in the background. Inspired
by a Cree Native American saying

-  Variations within an edition can be in size, different tints, photographic print process (either archival quality giclee or fine art C-print) and small details within an image. Therefore, there will never be 150 exactly the same.
- Each image comes with signed and numbered Certificate of Authenticity and a record is kept by Maria of all image details.
- To maintain exclusivity, no cards are produced of these four images.

The Etching Series - the Wistow Trees Collection, were inspired by the extensive snowfalls which occurred throughout most of the UK one year in early February. I remember my joy one morning when I saw the thick enveloping of hoar frost and mist outside my window. When the more sensible course of action would have been to stay snugly wrapped up inside, I triple-wrapped up, packed shovel, Wellingtons and salt grit in the car, (always best to be prepared!), and drove, very slowly, to the depths of the Leicestershire countryside. A gentle silence surrounded the rolling hills of the Wistow area, dogs walked, passers-by nodded, visibility was negligible, varying shades of white to grey, walking within a cloak of white-grey mist, with dark etchings of tree trunks, hedges and fences outlined in the near distance. I was in my element, a three-dimensional monochrome haven, feeling timeless, yet fleeting and changing by the minute.

By the afternoon, the mist had lifted. But I had captured the atmosphere of those fleeting moments . . . 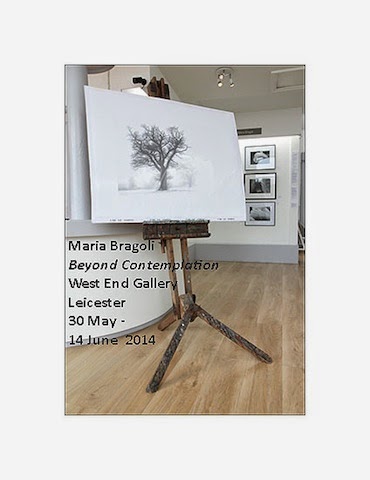 The resultant series of images, The Etching Series, forms part of my ongoing 'painting by camera' concept, which I first described here in December 2011 -

'Painting by camera' is my term for many of the images that I create,
combining my vision of an image, playing with light and using the camera
as both the canvas and the brushes, where the final image is created in camera
as much as possible.'

The Etching Series develops the concept further by adding manipulation in order to combine the initial capture with the concept I had on the day, of clean, sharply detailed monochrome forms.

Images in The Etching Series - Wistow Trees have been very well received from when gallery owners first saw a preview selection in late winter/early spring 2012. However, before delivering to galleries, I wanted time to develop and extend the collection, until I felt happy with the final results. The current set of 4 images were only finalised in late September 2012 and have been only been on show periodically at a small number of high-end galleries from late 2012. Viewers comment in particular that the images are striking, calm and contemplative. Other comments are that viewers are unsure what media the images are, whether a painting or etching. This is exactly what I wanted to achieve, the crossover and blurring of traditionally distint and separate fine art forms.

A special characteristic of this series is that there is a variation within each limited edition of 150. I produce a small batch of each image at a time, and between each batch there is a variation in tint or contrast and sometimes in minor changes to small details within the image. Tints can vary from soft to mid grey to indigo blue to a woody tint, giving a more individual character to each image.  This is in keeping with the centuries old tradition of fine art etching now updated within my images.


Some images lend themselves to a wider variety of tints, such as "When the Last Tree . .
.', while others, such as  'Church Brook', have a more restricted palette range.

Along with a number of other images in the same style, each image forms part of a limited edition of 150, on photographic art paper with archival quality inks. Each image is signed and certificated. Within each edition, varying sizes are available, starting from 10 inch x 8 inch (mounted) to around A4 and larger.

Images are available with pure acid-free mounts, framed and mounted, in off white solid wood frames, unwaxed solid oak frames, or bespoke hand painted wood frames in a soft ivory coloured wash allowing the wood grain to show through. Frames are sealed with acid free materials and come with cord and fittings ready to hang.

The rich heritage and symbolism of trees is an integral part of timeless cultures and mythologies. I also support the need for rural and environmental protection as essential to the human spirit.


When the Last Tree . . . ' was inspired by the Cree Native American prophecy:
'Only when the last tree has died and the last river been poisoned and the last fish been
caught will we realise that we cannot eat money'.

From late 2012, images from The Etching Series - Wistow Trees have been very well received in various galleries, with collectors purchasing from the local area, to London and intercontinentally.


Leicester Open 24, Leicester Museum, Spring 2013
'When the Last Tree . . .' was selected for the New Walk Museum and Art Gallery Open 24 exhibition in Leicester in spring 2013. It was a large scale image with a soft woody brown
tint and bespoke framing. This was the first time I submitted an image for a major open
event, with national recognition, and of course, I was delighted that it was selected.

This image has now been sold.

Another picture from The Etching Series - Wistow Trees was selected for the Rutland Open Art Exhibition, spring 2014. It was one of only two photographic images in the exhibition, along with oil paintings and sculptures.

A number of tints are available within the same limited editions, for example, a soft sage grey, or a stronger black and white tint.  Some images can also have a soft indigo/rose pink tint, a soft woody tint, a soft pale green tint, a soft, light duck egg blue. Some images within the set of the four core images have a more restricted palette.