- A Selection of Maria's most significant shows, both group & solo exhibitions. These were time restricted exhibitions.

This page starts with a selection of featured exhibitions, followed further down, by a chronology of gallery exhibitions. It does not include retail outlets.
You are welcome to contact Maria for details of galleries and outlets where her work is currently available, or to discuss commissions and viewings.

Both the exhibition and the Charity Auction at Forman's Smokehouse were conceived to raise funds for building a memorial to those involved in the Bethnal Green Tube Disaster in World War Two, in March 1943. At that time, information about the disaster was suppressed in the media, to avoid propaganda. The Stairway to Heaven Memorial Trust worked tirelessly for decades to raise funds and in December 2017, the memorial was finally completed and inaugurated, near the Tube station itself. Maria is proud to have been involved in that process.

The Auction Wall for the Bethnal Green Charity. Duffy'e Bowie picture was still being framed.

Forman's Smokehouse is an amazing mix of history and modernity. For generations, it has been a working salmon-smoking outlet, now combined with a restaurant fit for gourmets, superb views of London's Olympic Village and eclectic gallery offerings.

A selection of atmospheric shots, both behind the scenes and on stage, from a number of 1448 theatre productions at The Y Theatre, Leicester

I am delighted that the West End Gallery hosted a solo exhibition of my work over a two-week period, a very pleasing exhibition.

Drawing on the basis of my solo exhibition 'Contemplations on Darkness & Light' from a few years ago, a selection of core limited editions was shown side by side with new, previously unseen work, showing the development of the original, core themes.

A selection of mounted only work is also available long-term from the gallery browsers.


Work selected for Rutland Open 2014
at the Rutland County Museum, Oakham
Catmos St, Oakham, Rutland LE15 6HW   Saturday 15th March - Saturday 26th April 2014
I was delighted that one of my works was selected for this prestigious annual exhibition, especially since it was one of only two photographic images in the whole exhibition.

Promoted by Arts for Rutland, this exhibition shows a  varied selection of art and sculpture by local East Midlands artists, in the beautiful setting of Oakham's County Museum.

One of only two photographic images in the exhibition, 'When the Last Tree . . . ' is a large size limited edition print from The Etching Series - Wistow Trees.  In a hand painted bespoke frame in solid wood, this particular print has a delicate indigo-rose tint surrounding the central oak and background trees.  Other tints and sizes can be commissioned from me directly.

More details of the series can be found HERE

An exhibition of theatre production shots from the 1448 theatre festivals held at The Y Theatre in 2013 and 2014. I have told the story of the backstage creation of short plays, from initial theme to final rehearsal. There are also shots from the final plays on stage, capturing essential atmospheric moments.  Capturing the images in an art photography style, they become an extension of my fine art photography.


The story of the events, with a fuller selection of images, are viewable  HERE

and a selection of commercial galleries

NB. After a number of years where my work was validated by being selected for major shows, from 2014, I decided to  concentrate on commercial galleries and venues and working directly with private commissions.


West End Gallery, Leicester, The Big Little Picture Show, 2 November 2013 - 1st March 2014
For this exhibition, all works were medium to small size.
The exhibition got off to a flying start, with one of Maria's framed images being the first to sell. The framed work was an intercontinental order which the collector picked up when next visiting the UK.

1448 LEICESTER THEATRE FESTIVAL, The 'Y' Theatre, Leicester,  Maria Bragoli - Selected works',  May 2013
Maria was invited to show her work as part of the 1448 Leicesterfest, the world's quickest theatre festival. Exhibited was a selection of Maria's abstract and semi abstract work, all fully mounted and bespoke framed. Some works were part of the ongoing series, Contemplations on Darkness and Light, as well as a selection of Wistow Trees.


LEICESTER MUSEUM OPEN 24, New Walk Museum & Art Gallery, Leicester,  2nd February - 7th April 2013 - Panel selection of 'When the Last Tree . . . '
This is the first time Maria submitted a piece for the prestigious New Walk Museum and Art Gallery Open 24 exhibition, and she was delighted when the large size, limited edition 'When the Last tree . . .' was accepted for inclusion. The image had a soft woody tint, acid free mounting and bespoke framing.

This image has since been sold 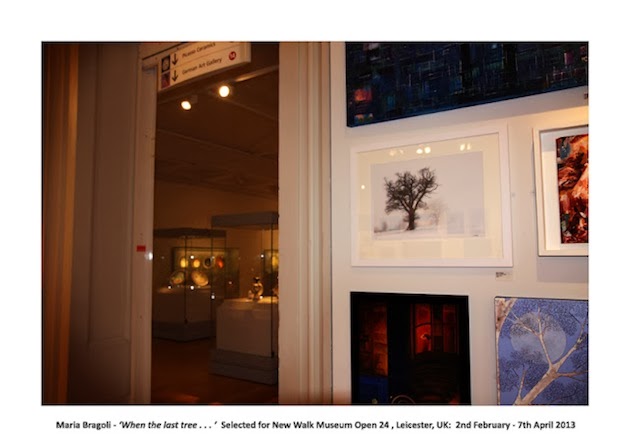 CHARNWOOD MUSEUM, Loughborough:  SOLO EXHIBITION 2 - Maria Bragoli - 'Beyond Contemplation 2',  3rd August - 30 September 2012
After seeing Maria's work, she was invited by the Museum Curator to have a solo show over two separate occasions,to critical acclaim in the local press. 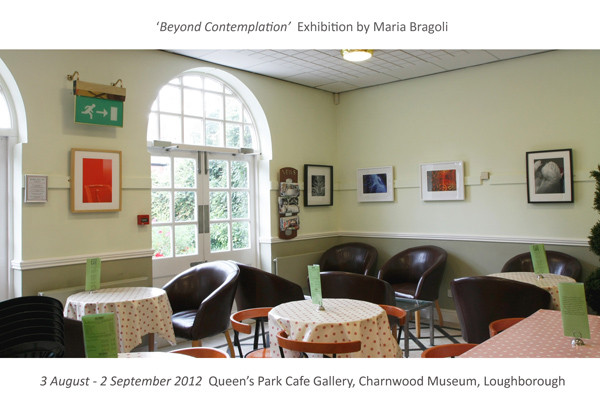